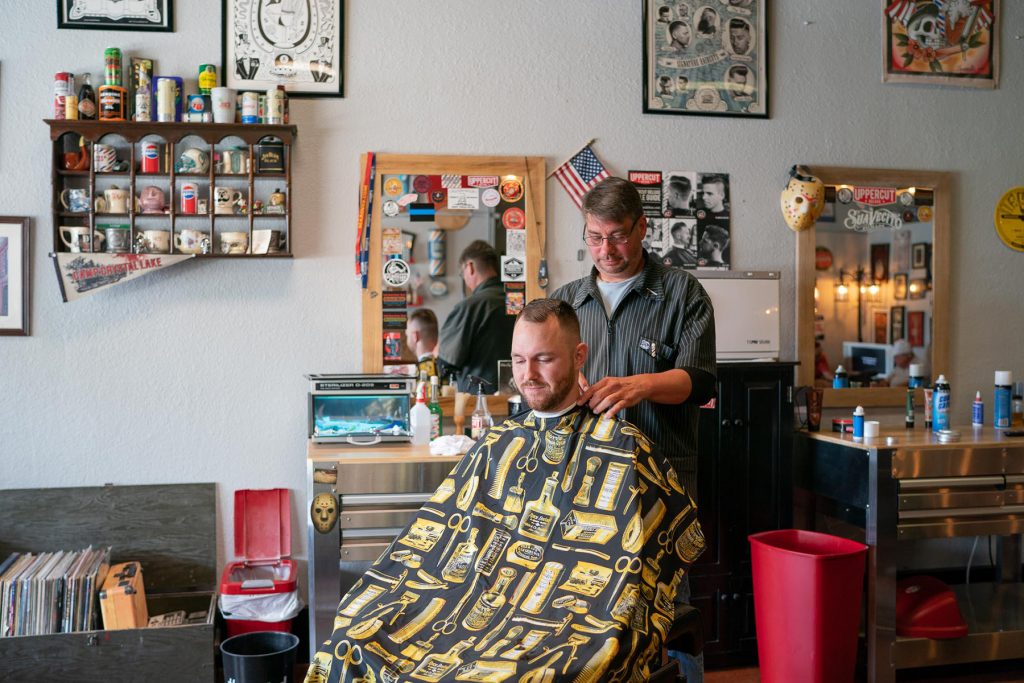 LONDON, Ky. – Jason Kovach,  owner of the Tonic Room Barber Shop & Shave Parlor, on Main Street in London, Kentucky, was eager to share his thoughts as he gave a haircut.

Kovach served five years in the U.S. Marines and offers a discount to veterans. American flags and Marine Corps memorabilia decorate the shop. Kovach has an American flag pin on the pocket of his barber’s jacket, with the words: “Honoring our Veterans.”

When asked about the biggest problem facing America today, he responded in one word: “Facebook!” Raquel Morgan, the one female haircutter in the  shop, agreed.

“You can’t enjoy your life because you’re too busy comparing and arguing for no reason,” Morgan said.

Terry Napier, a customer, joined in: “People are too sensitive anymore. You say something and they say, ‘I’m offended.’ That’s one of our civil liberties, freedom of speech. Men have fought and died for that. Nobody respects that anymore.”

Drugs and a struggling economy are also a concern in the local community of 8,000, where the median household income is $33,000.

“I moved here from Ohio. I mean, they got drugs, too; but, this area here is just infested with drugs,” James Barnett, another customer, said. He said too many children are homeless in the area.

“Small businesses can’t stay in business if prices don’t go up. I feel sorry for a lot of women that work around here and are divorced. They barely get by,” Barnett added.

Kovach, the owner, complained about kids today, and a few other patrons grumbled their agreement.

Barnett said if he could change the country overnight, his wish would be: “Get people off drugs, get them a job, and let them take care of their kids.”

“We had an election here in May,” Barnett said. “Only 20 percent of the people got out and voted. If you want something changed, yes, get out and vote. The same thing goes for the president. If you don’t vote, you shouldn’t be fussing about nothing.”