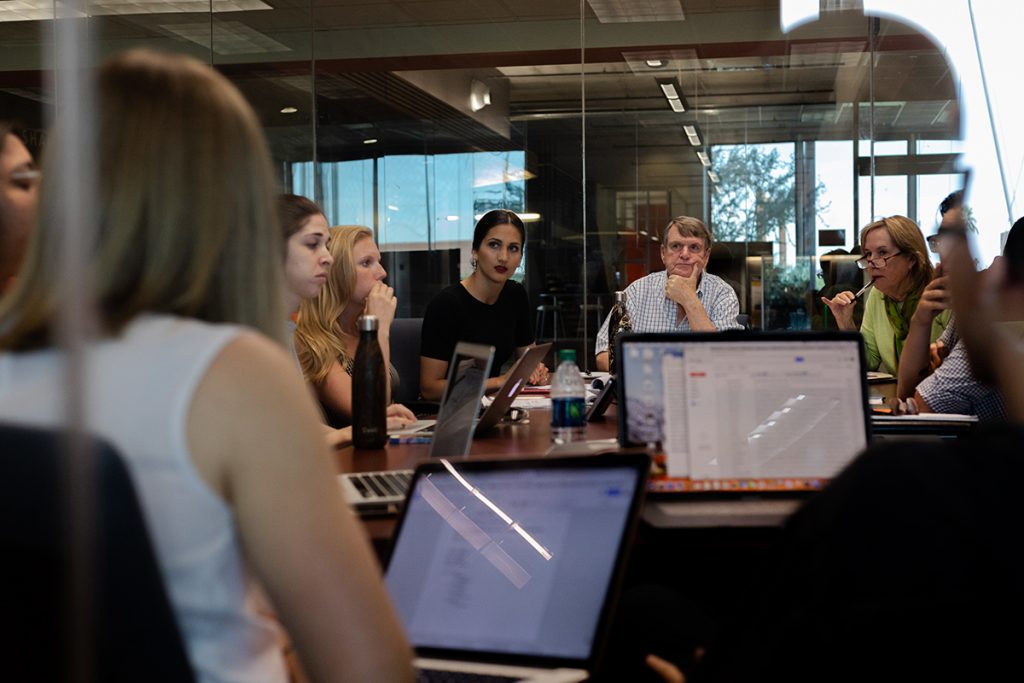 Professor and editor Len Downie, Jr. meets with project editors and fellows to discuss stories for the project. (Justin Parham/News21)

PHOENIX — Vandalized synagogues and mosques. Physical attacks on members of the LGBTQ and Native American communities. Threats of violence on college campuses.

Hate crimes have increased since the November 2016 election, according to reports from the FBI.

Thirty-eight fellows are spending this summer examining nearly every aspect of hate for this year’s Carnegie-Knight News21 investigative journalism project titled “Hate in America.” The team is partnering and working with ProPublica’s “Documenting Hate” project, which collects, researches and reports incidents.

The fellows, top students from journalism programs across the U.S. as well as Canada and Ireland, are reporting on racial and religious-based hate and taking a deeper dive into hate perpetrated online, on college campuses or against Native Americans and those in the LBGTQ community.

Fellows also are looking into hate crime laws in every state and analyzing public perception and tolerance of certain races and religions over time through data.

The newsroom is based in Phoenix, at Arizona State University’s Walter Cronkite School of Journalism and Mass Communication, but fellows will be on the road this summer, reporting across the U.S. They are talking to those who have experienced, witnessed, perpetrated and reported hate.

Veteran journalists Len Downie Jr. and Jacquee Petchel, the top editors for News21, selected this year’s topic, Hate in America, saying it was both important and timely.

“Much of the coverage of this subject has been localized or has been focused on one aspect of racism or prejudice,” said Downie, the former executive editor of The Washington Post.

“What we’re trying to do is something that’s national — both national in scope and national geographically — and encompassing the project as a whole,” Downie said.

While the on-the-ground reporting takes place this summer, the project has been in the making for almost a year. Downie and Petchel chose the topic last fall. Fellows began their research and reporting in January, meeting weekly during the spring academic semester with Petchel, a professor at the Cronkite School, and Downie, the Cronkite School’s Weil Family Professor of Journalism.

News21, which launched in 2005, has won numerous awards in journalism competitions.

Last year’s News21 investigative project was the safety of drinking water, in part because of problems with clean water in Flint, Michigan. Previous projects have looked at guns, food safety, voting rights and veterans’ issues.

“We’re always trying to shed light on a topical subject, in which there is more than one view on it,” Downie said.

Downie also sees News21 as having an advantage that many news organizations don’t have today.

“News21 can have somewhere between 20 and 40 reporters working on an investigative project in a concentrated effort,” he said.

Individual fellows are supported by their universities as well as by participating news organizations and philanthropists.

The fellows’ work on “Hate in America” will be published at hateinamerica.news21.com at the end of the summer, and by dozens of news organizations.