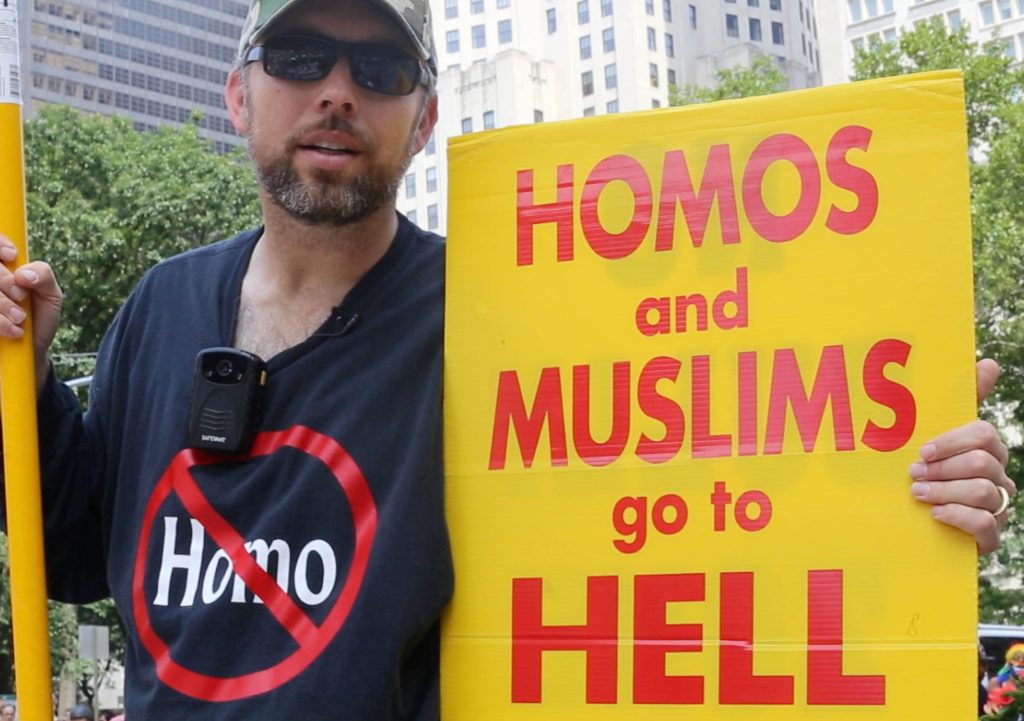 Pastor Aden Rusfeldt holds 10 to 15 protests against the LGBTQ community and Islamism in the Northeast area. (Renata Cló/News21)

NEW YORK CITY – “Homos deserve AIDs,” the sign reads. “Homosexuals end up in hellfire,” another reads. They were held up by Pastor Aden Rusfeldt and a small group of his followers who had come to New York City’s 2018 Gay Pride March in late June.

Protected by police in a roped-off area, they chanted homophobic slurs to the people walking by.

Most people ignored Rusfeldt and his group from the Key of David Christian Center in Philadelphia, but a few cursed at them, or called them wrong, or tossed their water bottles at them.

Rusfeldt said that his goal at the gay pride march and other events is to spread his interpretation of the word of God and help Christians “get bolder in their faith.”

At least 10 times a month, Rusfeldt estimates that he and a handful of other members of the Philadelphia church hold protests against the LGBTQ community and Islamism at college campuses and events around the Northeast.

The Anti-Defamation League has been tracking Rusfeldt’s activities in the Philadelphia area since late 2016. Jeremy Bannett, associate regional director of ADL in Philadelphia, describes Rusfeldt’s message as “an extreme interpretation of Christianity characterized by homophobia, Islamaphobia, misogyny and other forms of hate.”

James Ross, 28, a Philadelphia businessman who was part of Rusfeldt’s group at the New York City march, explained his own belief.

“In this day and age, I think everybody has heard the good gospel of what God will do, but they miss all of it,” Ross said. “I have heard many people running up and saying God loves everyone, and that’s not the truth.”

“New York City values itself in love, acceptance and inclusivity,” Consoti said. “It’s just these four other people against thousands of people who just want to express love for one another. They are just being hateful.”

Chelsea DeMarte, co-president of Gaylesta, the psychotherapist association for gender and sexual diversity located in San Francisco, described protests by so-called religious groups against the LGBT community as incredibly disturbing to people.

Religious (hate) speech can be very harmful for individuals struggling to navigate through their sexual identity and faith, DeMarte said.

“When somebody from a religious organization is openly saying negative things about LGBT people or that they are going to hell, they are coming from the assumption that it is OK to impose your beliefs onto somebody else because you believe they are abnormal or deviant and that is not OK,” she said.

Rusfeldt said he has repented in recent years. He was “headed to hell,” but God is loving, he said.