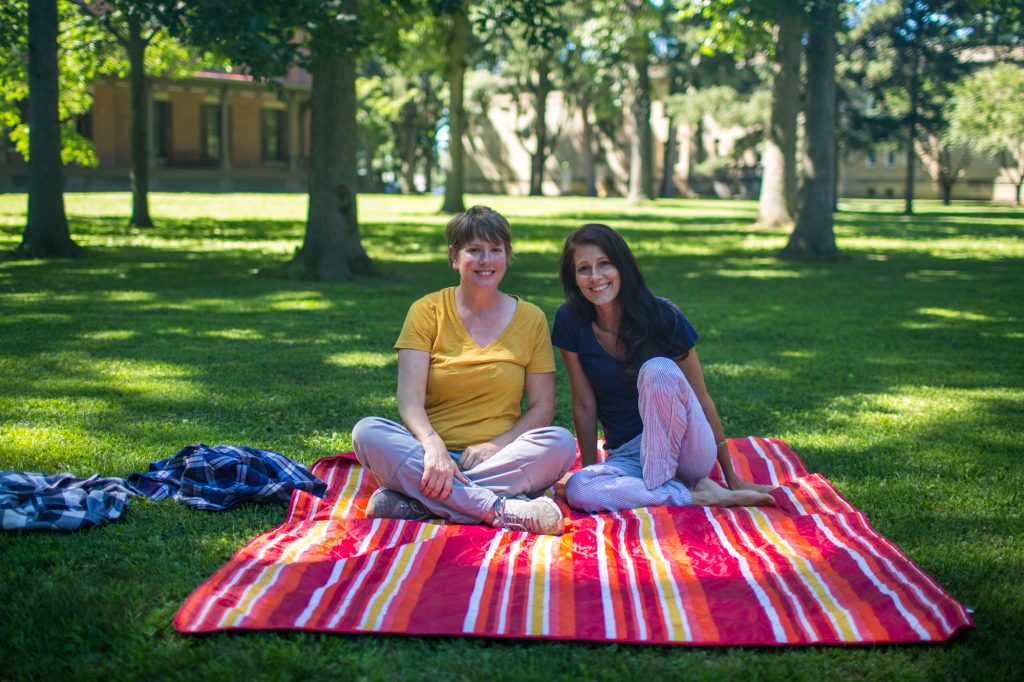 Julie Bellfy (left) and Fremont, Ohio native Chandra Palm spoke with News21 while sitting on the lawn at the Rutherford B. Hayes Presidential Library and Museum. They believe that social media contributes to the divisiveness in America today. (Alex Lancial/News21)

Of the 442 hate crimes reported to the FBI by Ohio police in 2016, 336 were related to race. Most of these crimes occurred in three of the state’s largest cities: 123 in Columbus, 32 in Cincinnati and 31 in Toledo.

“The one thing that you’ll notice when you study American history on a long-enough timeframe is that the one issue that holds all of that together is racism and racial relations,” he said. “We see ebbs and flows, and obviously we see stuff going on today.”

News21’s road warriors found the historic site to be a good place to talk about race in America.

When Hayes took office in 1877, the final vestiges of the Civil War were disappearing as the Reconstruction Era reached its conclusion. Federal troops only remained in South Carolina and Louisiana. In exchange for his presidency, Hayes agreed to withdraw all federal troops from the South in a deal with Southern Democrats known as the Compromise of 1877.

The shift in control quickly laid the foundation for Jim Crow laws that would oppress and brutalize black Southerners for nearly a century, until federal civil rights legislation was passed in the 1950s and 1960s.

“Hayes hoped that, by finally ending the struggles of the Civil War, there were enough former Whigs and Republicans in the South to not lead to 80 years of oppression, but he was wrong,” McLochlin said.

McLochlin said the effects of systemic racism and division are still present in America.

Jim Ryan, a resident of upstate New York who was visiting the museum for the first time, said politics are driving the country apart.

Fremont native Chandra Palm, visiting the museum with her friend Julie Bellfy from Toledo, agreed that America has struggled with “conflicts from the very beginning,” but said social media contributes to the divisiveness today.

“Since we’re more plugged-in to things, people are seeing it more instead of sitting on your back porch talking to your neighbors or talking to your family,” Bellfy said. “It becomes more explosive.”

Palm and Bellfy don’t have Facebook accounts. They said the posts seemed to be driving people apart, not together.

Palm said the division in the country seems louder because of today’s technology and all the social media.

“We’re just hearing it more, but it’s always been there,” Palm said.