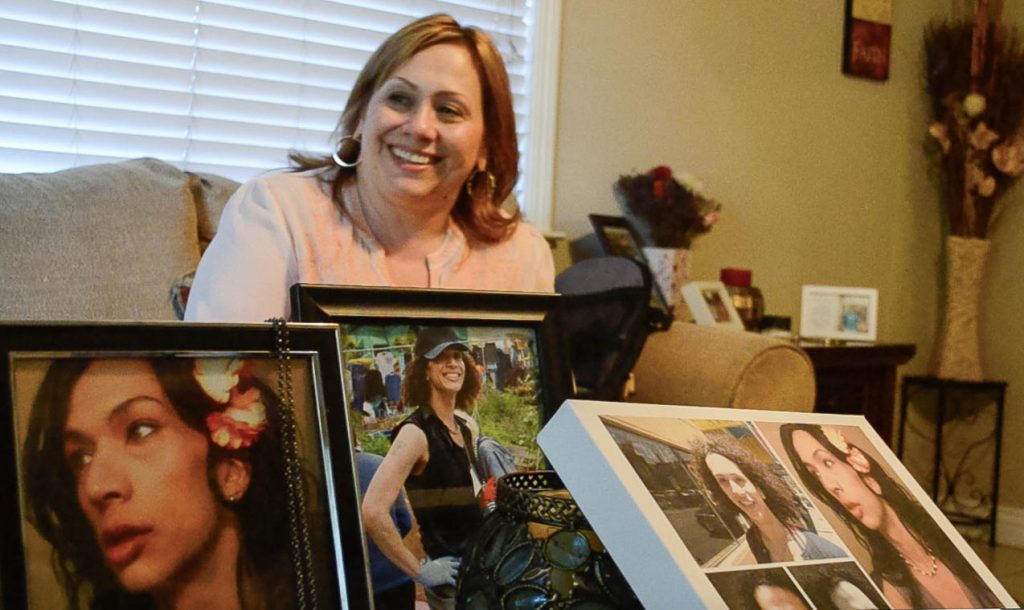 Linda DeJesus remembers the last Thanksgiving she had with her daughter, Taja, who cooked for the entire family a few months before she was killed at her apartment complex in San Francisco. (Renata Cló/ News21)

Woods, the Oakland Police Department LGBTQ liaison, said she prepares herself to read the names of people she knows on the list of the year’s victims before each Transgender Day of Remembrance.

Since 2016, at least 66 transgender people have been murdered in the United States, according to the Human Rights Campaign. A News21 analysis found more than half of the victims were people of color and at least 29 of the cases are still under investigation.

Only one case was classified as a hate crime by law enforcement, even when LGBTQ advocates and victims’ communities argued they were targeted for their gender identity.

Transgender victims’ cases are frequently complicated by the circumstances surrounding their deaths, which makes it difficult to classify their homicides as hate crimes. The victims are often killed by a romantic partner, sex work client or stranger.

“It’s important to remember that hate crimes occur in all sorts of different contexts. I think people often, when they think about them, they immediately go to something on a street outside a gay bar with a bunch of young men,” said anti-LGBTQ hate crimes expert Gregory Herek. “It’s a common scenario, but hate crimes are also committed in families, in the home, in schools, in the workplace and by all sorts of people.”

China Gibson, a 31-year-old African-American transgender woman, was shot in the back between eight and 10 times while exiting a shopping center in New Orleans in February 2017. Gibson’s mother, Tammie Lewis, and her sister, Iona Maxie, believe the murderer was a lover who hoped to conceal his sexual relationship with Gibson to avoid questions regarding his sexuality.

“I think China was killed because people want to live a certain lifestyle, but then have a closeted lifestyle that they don’t want to be outed about,” Maxie said. “China was a person, when she met men, she told them exactly who she was, and you have to decide going forward if that’s what you want to be a part of whether people find out or not. I just think the person just didn’t want people to find out. And that’s why China was killed.”

The New Orleans Police Department officers who responded to Gibson’s shooting did not categorize her murder as a hate crime in the incident report. In subsequent statements, law enforcement officials have said the murder is not being considered a hate crime.

Kevin Griffin, Gibson’s cousin, said while the details surrounding her murder are ambiguous, there’s little reason Gibson would have been targeted, making her gender identity a potential motive in her killing.

“This is one of those people who would give you the shirt off their back. People say that, because it’s cliché and cool, but this was the person China was,” Griffin said. “Would not do any harm to anyone. She just wanted to be who she was and she didn’t want any static or any friction so she wouldn’t give it.”

Even if law enforcement found Gibson’s killer and confirmed a gender identity bias motive in her murder, the ability to pursue hate crime charges on a state level is limited in Louisiana. While the state’s hate crime statute defines sexual orientation-based crimes as hate crimes, there is no such provision for gender bias-based crimes, leaving little legal recourse other than federal hate crime charges.

Other states like Louisiana without gender identity provisions have seen the most murders of transgender individuals in recent years. Since 2016, eight transgender people have been killed in Texas, six in Florida, and five in Ohio and Georgia. Seven transgender women were murdered in Louisiana during that time.

In states that can pursue hate crime charges in gender identity cases, justice is not always a guarantee.

California has hate crime and non-discrimination laws that cover individuals targeted for their gender identity or gender expression, but the state’s transgender population is still vulnerable.

Taja Gabrielle DeJesus, a 36-year-old transgender Latina woman from San Francisco, was stabbed to death in her apartment complex in February 2015. Neighbors reported hearing an argument between Taja and a man, and called the police, said Linda DeJesus, Taja’s mother.

When first responders arrived at the scene, they found Taja in the stairwell. She had been stabbed nine times and was pronounced dead. By the time officers found the man, who fled the apartment, he had committed suicide, DeJesus said.

Although DeJesus believes the murder was a hate crime, it wasn’t classified as such by investigators. She told News21 that detectives said the suspect, who was going through a divorce, was trying to reconcile with his ex-wife.

“They considered it an argument that got escalated, got out of control,” DeJesus said. “He killed her, and in my heart I believe that no, he didn’t want anyone to know that he was with a transgender woman.”

Before transgender individuals are victims of fatal violence, they can face a number of factors that put them at higher risk for hate, murder and discrimination.

A 2011 report published by the National Center for Transgender Equality and the National Gay and Lesbian Task Force, two national LGBTQ advocacy groups, found more than 1,100 of the over 6,000 transgender respondents reported being homeless at some point. More than 950 said they had to find alternative sources of income, like drug trafficking or sex work, to survive.

Before she was killed, Taja was struggling to get by, and had turned to sex work to survive, her friend and sobriety sponsor Danielle Castro told News21. She said she ran into Taja while going home from work about two weeks before she died.

“I took her home to Bayview where she lived. She wanted me to see her place and the area felt unsafe, but we went inside and she had bare minimum,” Castro said. “I could tell she was really struggling.”

Among the challenges the transgender community faces, there’s also a lack of trust in law enforcement. The National Center for Transgender Equality survey reported that almost 3,000 respondents said they were uncomfortable reaching out to the police for help.

Woods, who trains Oakland Police Department officers to work with the LGBTQ population, said most law enforcement officers have a “very limited” perspective on the transgender community. Most, Woods said, only engage with transgender folks in an emergency response capacity or when a transgender individual is committing a crime.

Castro, who is also a transgender woman, told News21 she had a bad experience with police officers days after Taja DeJesus’ funeral.

Castro said she was sitting in front of a bar in the Castro District, a gay neighborhood in San Francisco, while a march against transphobia took place. The bar manager came out and told Castro to leave. When she refused, he shoved her.

“He was saying transphobic things, and I couldn’t believe that he put his hands on me and was so forceful when I was obviously disabled,” said Castro, who was dealing with hip problems at the time.

The manager called the police, and Castro said the officers refused to take her statement.

“The police came and they were awful. Just awful,” Castro said. “I wanted to file charges, but they said they couldn’t do a police report there because it was out of their district.”

Castro said she later found out the officers had lied to her, and could have done a police report there.

Of the 39 closed transgender murder cases recorded by the Human Rights Campaign since 2016, only one had hate crime charges filed by the local district attorney’s office. The police involved did not say if they investigated the case as a hate crime homicide.