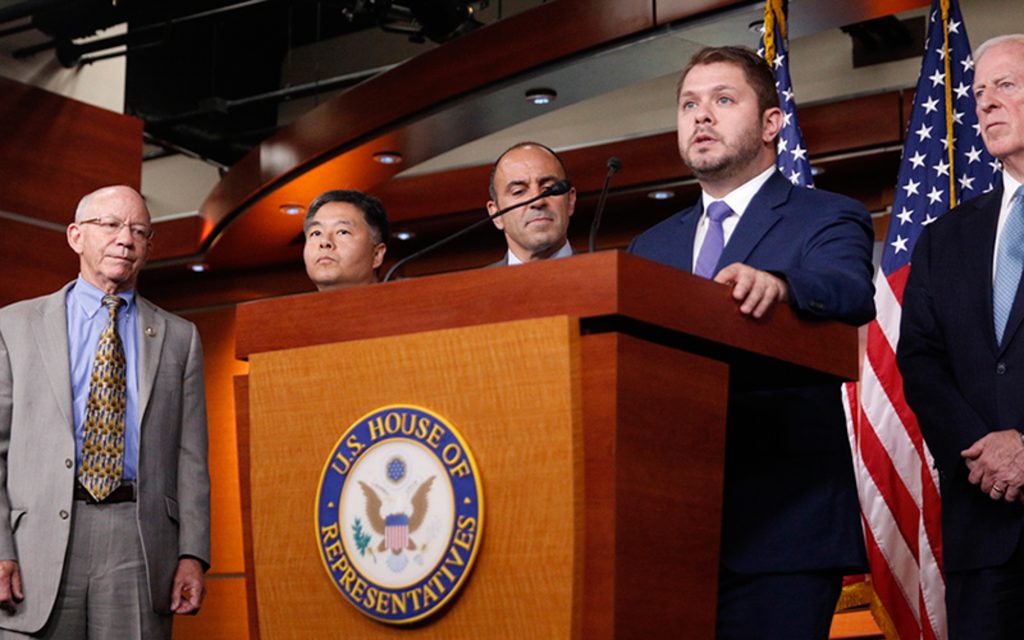 U.S. Rep. Ruben Gallego, D-Arizona, told News21 that anti-Latino and anti-immigrant hate are "one and the same." (Photo by Sarabeth Henne/Cronkite News)

The anti-immigrant movement merged with anti-Latino sentiment under the guise of border security after the 9/11 terrorist attacks, Gallego said. In response, Latinos have felt compelled to engage politically to combat the wave of misperception and xenophobia.

“What you started seeing is coded language – especially in Arizona –where people were talking about ‘well, I’m not against Latinos, I’m against illegal immigrants,’ but basically using that term to cast everybody the same,” he said. “I think there’s no difference anymore, and they’re wrapped in the same, which is why you’re also seeing Latinos now more strongly standing up for immigrant rights.”

Anti-Latino and immigrant hate has more recently been exacerbated by national legislation and rhetoric heard after the 2016 election, Gallego said.

“I remember growing up hearing anti-Latino slurs being thrown at me as a Latino – being called derogatory terms throughout high school,” Gallego said. “I certainly saw more rhetoric thrown at me as a Latino elected after 2010 because once the politicians started talking in these terms, and some of them became even more and more pejorative and racist … a lot more people felt that it was OK and acceptable to engage in that in public.”

Nationwide, a 2018 report by the Center for the Study of Hate and Extremism in San Bernardino, California, found that anti-Latino hate crimes in America’s largest cities increased by 176 percent in the first two weeks after the 2016 election.

But politics from well before the Trump administration have done just as much to exacerbate the problem, said Gallego, who in the past has received death threats from white supremacists while trying to fight anti-immigration legislation when he served in the Arizona Legislature.

“I had death threats — personalized notes — left at my doorstep by white supremacists when I was at the statehouse because I was fighting to stop some crazy bills that were going to really affect immigrant communities,” he said.

Specifically, he pointed to the Arizona Senate Bill 1070 as a turning point in the anti-immigration movement. The bill allowed for law enforcement officials on the city, county or state level to inquire about citizens’ immigration status if they have “reasonable suspicion” to do so, according to the Arizona Legislature.

“With the culmination of SB 1070 happening, we basically tried to allow racial profiling of Latinos based on this idea of trying to curtail quote-unquote illegal immigration,” he said. “By 2010, there were Latino families in Arizona that were being told to go back to their country, to go back to Mexico – these are people that have lived in Arizona for generations.”

Anti-immigrant hate is due, in part, to massive influxes of immigrants in the 20th century and white backlash, according to Janice Iwama, an assistant law professor at American University. Between 1990 and 2015, the immigrant population more than doubled from 19.7 million to nearly 43.2 million living in the United States.

Gallego said there has been a decades-long political conflict over immigration in Congress and he doesn’t see any work toward a resolution in the near future.

“The rhetoric that comes from the White House – it’s not really challenged by the Republican leadership in the House,” he said.