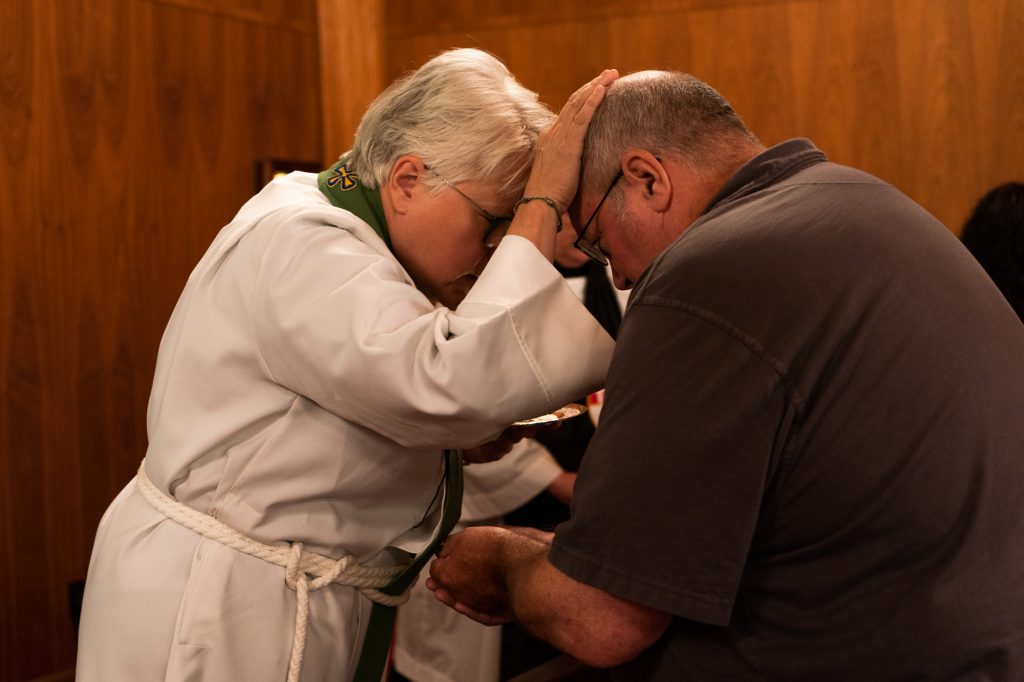 The Rev. Dr. Susan Hrostowski prays with a member of the congregation during communion at St. Elizabeth's Episcopal Church in Collins, Miss. (Ashley Hopko/News21)

COLLINS, Miss. – The Rev. Dr. Susan Hrostowski, an openly-lesbian woman, said she expected some backlash when she was appointed head pastor of St. Elizabeth’s Episcopal Church in Collins, Mississippi, because of recent drama in the area regarding churches’ acceptance of gay marriage.

In nearby Hattiesburg there are two churches – one is welcoming and the other is not, Hrostowski said.

“So when the welcoming church said we’re going to allow gay marriages in our church, you know the haters went across town to the other church,” she said.

Hrostowski, who serves as the church’s vicar, doesn’t understand how people use the Bible to decry the LGBTQ community – the verses people use to support the argument are typically taken out of context.

It’s just one of several ways Hrostowski is fighting for equality in the town of about 2,500 residents.

“If you’re going to say, you know, thou shalt not lie with a man as a man lies with a woman, then you have to look at the part that says if your neighbor labors on the Sabbath he should be killed,” she said. “That’s part of it, looking at scripture and understanding that you can’t just read a line of scripture, pull it out of context and lay it on 2018.”

Hate crime laws are designed to protect victims from being attacked for something they have no control over, so a common argument against LGBTQ protections is that being gay is a choice. But Hrostowski said she doesn’t understand how anyone thinks it could be a choice given how poorly the LGBTQ comunity is treated.

“Why would people choose this?” she asked.

Hrostowski herself has been the victim of anti-LGBTQ bias many times, and it motivated her to try and effect change.

When her son, Hudson, was born, Susan Hrostowski was not listed on his birth certificate.

Hrostowski and her wife, Kathy Garner, had their son through artificial insemination in the state of Mississippi 18 years ago, where LGBTQ couples were banned from adopting a child. Because Hrostowski didn’t carry the child, she could not be her son’s legal guardian.

“When he was young that was a very scary thing because if Kathy, God forbid, had been run over by a Mack truck or something, the judge could say no, Susan, you don’t get custody of this kid,” she said.

Garner and Hrostowski filed a lawsuit that ultimately went to federal court and overturned Mississippi’s ban on LGBTQ adoptions. She was finally able to adopt her son when he was 16 years old.

Hrostowski said Mississippi state legislators are more focused on blocking protections from the LGBTQ community than fixing prominent issues in the state.

Hrostowski is currently working on passing an ordinance in the city of Hattiesburg to protect the LGBTQ community from hate crimes, but she said the city’s current administration won’t budge on their stance against it.

Hate is passed down and taught from generation to generation, she said, and that is part of the reason things aren’t changing in Mississippi. She said she sees it as more than a legislative issue.

“You can’t legislate morality, you know, whether you’re progressive or conservative,” she said. “We’ve lost empathy. That’s one of our biggest problems.”

Hrostowski uses her platform as a small-town pastor to help open the eyes of her congregation and her community, working to help them understand and accept the LGBTQ community. She uses her legislative advocacy to attempt to make legal change in her community. But she encourages everyone to stand up for what they think is important and make whatever change they can in the lives of those around them.

“If we can open one or two or three people’s minds about another way of looking at things, about an effort to love your neighbor as yourself instead of building up all that hate, then I’m extremely grateful for it.”