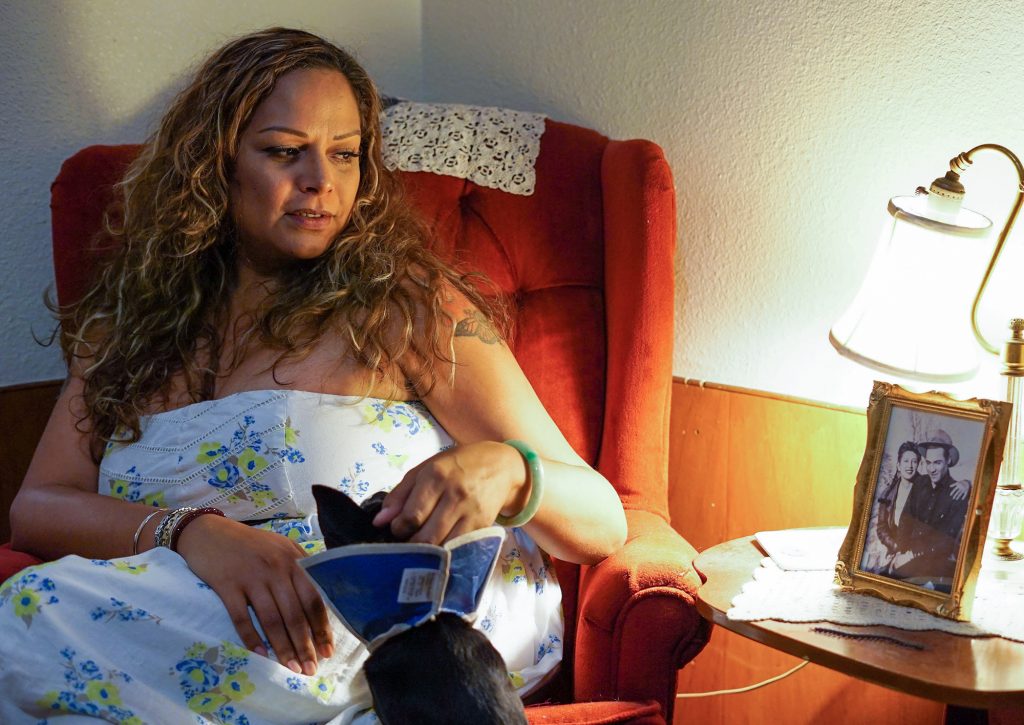 Danielle Castro, 43, looks at photos of family and friends while talking about her parents, who are part of the LGBTQ community. As a former sex worker, she said the trade can be especially dangerous for transgender women like herself. (Renata Cló/News21)

SAN FRANCISCO— In March, a Philadelphia jury convicted Charles Sargent of murder for killing Diamond Williams in 2013 by puncturing her skull with a screwdriver, dismembering her with an axe, and throwing her severed body parts in a field.

Before a New York judge sentenced Rasheen Everett to 29 years in prison for strangling Amanda Gonzalez-Andujar in 2010, his lawyer pleaded for a lighter punishment. According to him, Gonzalez-Andujar wasn’t on the “higher end of the community.”

In January, Los Angeles police charged Kevyn Ramirez in the stabbing death of Viccky Gutierrez, who was stabbed to death before Ramirez allegedly burned her home, leaving her remains severely burned. Police couldn’t immediately identify her.

LGBTQ advocates say society shuns transgender people from corporate jobs because of their gender identity, forcing them into survival sex work and other means of underground economy. But that places them in a dangerous trade.

According to the Trans Murder Monitoring Project, 62 percent of the 2,609 transgender people killed worldwide from January 2008 through September 2017 were sex workers.

Of the 14 transgender murders tracked by the Human Rights Campaign this year, at least two victims participated in sex work.

“It’s a nationwide problem that is happening all across the country and it is a direct result of transphobia and hate crimes, as well as the reasons that lead trans people to be in vulnerable situations,” said Victoria Rodríguez-Roldán, the trans and gender non-conforming justice project director for the National LGBTQ Task Force.

When transgender people feel they have no other avenue for income, they often sell their bodies, Rodríguez-Roldán said. Sex work can be defined as prostitution, pornography, services arranged online and other forms. Experts say prejudices in the workplace and housing lead transgender people to this point.

When they can’t secure a house or employment, transgender people feel they have no other choice but to partake in a dangerous craft such as sex work, said Kory Mansen, racial and economic justice policy advocate for the National Center for Transgender Equality.

“When you combine those factors, you get an amplified violence that these people experience at the intersection of that area of work and the trans identity,” he said.

Danielle Castro knows those factors too well because she’s lived it. Now, the 43-year-old Latina transgender woman enjoys a stable lifestyle. She lives in a house in Oakland, California with her two dogs. She earned her bachelor’s and master’s degrees at John F. Kennedy University, which is in the Bay Area.  She’s also project director at the Center for Excellence for Transgender Health.

But she participated in sex work for years before and after her transition into a female. When she hears horror stories of transgender sex workers’ murders, it resonates because “it could have been me,”she said.

“The reasons so many of us are engaging in sex work is because we don’t have other options to survive,” she said. “When you have a power to survive, that’s what you’re going to do. And when you get positive reinforcement from people that want to have sex with you and pay you, I’m not going to lie, it feels good.

“The sad part about it, though, is that people think we’re disposable because of it.”

“What often happens is sex workers are disproportionately subject to crimes, but they’re less likely to report them because they’re afraid of retaliation on the part of police officers,” said Sheryl Evans Davis, executive director of the San Francisco Human Rights Commission. “And we’ve heard anecdotally that, ‘I was robbed and I went to report it to a police officer and the police officer asked me, oh, were you doing sex work?’ So there was this victimizing the victim dynamic that was happening.”

When reported crimes happen, though, it’s harder to convict perpetrators of a hate crime, experts say. A hate crime charge automatically increases a typical punishment for states with applicable laws.

Gutierrez’s death, though still under investigation, was not immediately charged as a hate crime.

For transgender sex workers, other issues complicate proving a hate crime, and each case is unique. It is hard to prove victims were explicitly targeted for their gender, or if other circumstances, such as domestic violence, led to their deaths or mistreatment, Mansen said

“It is so difficult to get things tried as a hate crime because there are a lot of factors into proving the intent, so more often than not law enforcement doesn’t feel equipped to make the determination of whether something is or is not a hate crime,” Mansen said.

Of the four transgender sex worker deaths tracked by the Human Rights Campaign in 2015, none were charged as hate crimes.

Often, after a hate crime charge isn’t levied, the transgender community sees it as a failure.

As the leader of an advocacy group who works closely with the LGBTQ community and police, Davis said she sees both sides.

“There have been these moments when people are calling it out there in the streets and they’re saying that, ‘this is a hate crime’ and there’s a struggle with proving it.”

Victoria Rodríguez-Roldán agreed, saying the intricacies of each situation make it difficult to label each case hate-related. But to her, the biggest goal should be fixing the systemic issue that leads to these events.

Sophie Cadle, a 23-year-old youth liaison at the New York Transgender Advocacy Group, said her organization now works more with police to build relationships and help officers understand the societal factors involved with sex work. As a black transgender woman who participated in sex work, she said it’s important to be proactive.

“The violence toward the community is visible,” she said. “It’s there and it’s a continuous issue that’s affecting us.”

In San Francisco, sex workers who report experiencing or seeing violence won’t face prostitution charges because of a policy adopted in January by San Francisco District Attorney George Gascón and the San Francisco Police Department.  The ‘Prioritizing Safety for Sex Workers’ is the first of its kind in the nation, and is a collaborative effort to encourage reporting of violent crime.

Corinne Greene, policy coordinator for the Transgender Law Center, said this should build trust. Proving intent regarding hate crimes will always be tough. But if sex workers can courageously approach police, she said, it will help reduce deaths and mistreatment.

Danielle Castro has advice for people who are in the sex business.

“I hope people are safe and learn to protect themselves before they come into this trade that can be potentially deadly,” she said. “And if you’re doing it for survival, then God bless you.”