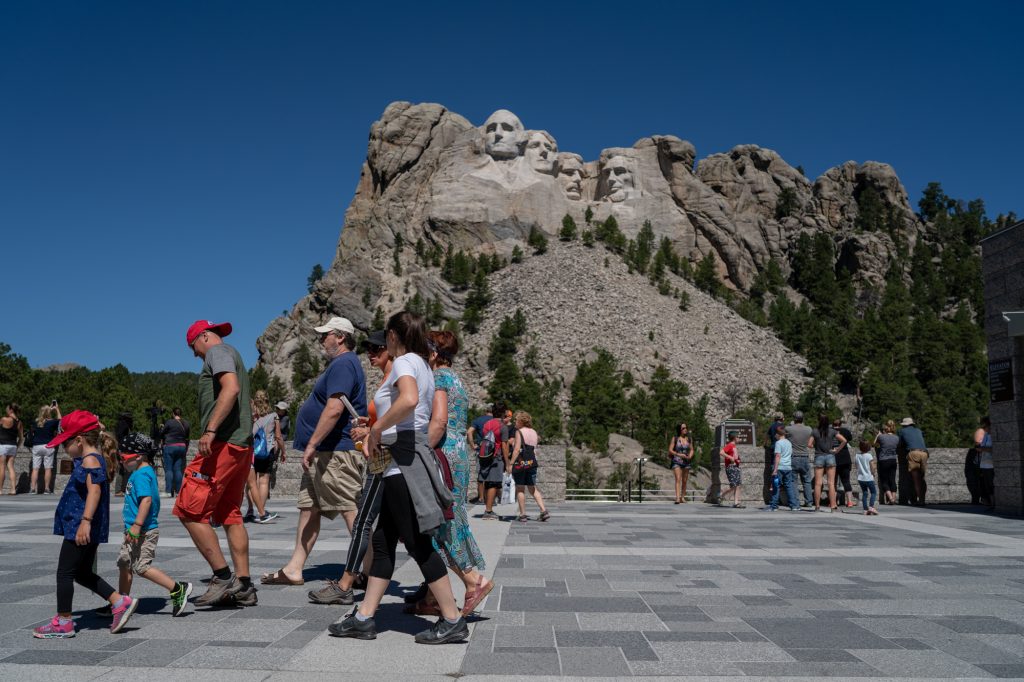 SIOUX FALLS, South Dakota — America’s early presidents would not be proud of the U.S. today, according to some tourists visiting Mount Rushmore in South Dakota.

On the seventh day of the News21 roadtrip, the fellows visited an iconic American site to talk with people about the state of hate in the country.

Jeff and Janet Smith from Michigan, perched on a bench to take in the famous mountain.

“Being here at Mount Rushmore just levels me so much,” Janet Smith said. “Our country needs to go back to what the founding fathers stood for. We need to be together and not 100 different groups fighting for our own thing. If you’re going to be here, be American like the founding fathers were. You came here for a reason, be dedicated.”

Her husband, Jeff, said the country has a long way to go with race problems, but the political problem is “huge,” too. He said the media is spurring the tension by showing all negatives and no positives.

“There are as many positive people in the country as there are negative and we always show the negativity,” Jeff Smith said. “You can persuade people to think one way if that’s the only way you show it.”

Looking at the mountain, he said the founding fathers wouldn’t be proud of the country today. If there were “men of their caliber today, we could be united again,” he added.

“The presidents here at Mount Rushmore could straighten out America,” he said. “America doesn’t have as strong of a leader today. We have too many ego politicians that are all about themselves and these guys weren’t. They were about building America.”

Charles Smith from Orlando, Florida, echoed the thought that politics is currently dividing the nation.

“The left is opposed to our president who we fully support,” Smith said. “They’re not doing what’s good for America. I think the founding fathers would be upset with the divides.

“Ninety-one percent of the media is reporting on Trump negatively,” he added. “The media has the Trump effect. People criticize Trump for tweeting, but that’s the only way he can reach the people, because the media won’t report what he’s saying accurately.”

Teacher’s aide Phil Dempsey from LakeLand, Florida, applauded efforts made today to deal justly with every culture, but he said political and racial divides are getting in the way.

“It’s really hard for African Americans no matter where they are,” Dempsey said. “They are racially profiled. Police come into neighborhoods and stop them for no reason. It’s always been bad but there is just more attention on it now and it’s bringing it to the forefront.”

Despite the divides in America, Dempsey said the early leaders of the country would be proud of certain aspects of America today.

Steve Mellado, of Michigan, on vacation with his wife, Brandy, and four children, said how children are raised affects whether they will feel hatred against people who are different from them.

“As you can see, we’re diversified, multi-colors and multinationals,” Steve Mellado said, pointing to his own mixed family. “There are political and racial divides and there always will be. It’s like that in every country. I think the hate is more media-driven at the moment.”

He added that these times are different in another way – hate is spread more widely and easily because of social media.

About 300 miles east of Mount Rushmore, the News21 SUV pulled up outside a lesser, but venerable, roadside attraction: The World’s Only Corn Palace.

The palace, in the heart of Mitchell, was built in 1892 as a way to prove to the world that South Dakota had a healthy agricultural climate.

About 500,000 tourists come from around the nation each year to see the corn murals.

Among them was Lauren Langston of Virginia, who is traveling the country in an RV with her husband, Devon. She said she likes that America is a melting pot, saying it’s part of its character, and always will be.

Langston added that although there are “divides among every group at the moment,” it’s important to remember our nation’s history, and that racial segregation wasn’t that long ago. She remembers her mother telling her about whites-only drinking fountains.

“Racial tensions don’t just go away because laws are made. It takes time,” Langston said. “It’s the same with gay marriage. Just because it was legalized doesn’t mean everyone feels great about it. If you want to change people’s minds you have to do it by getting to know people and having love and compassion for them.”