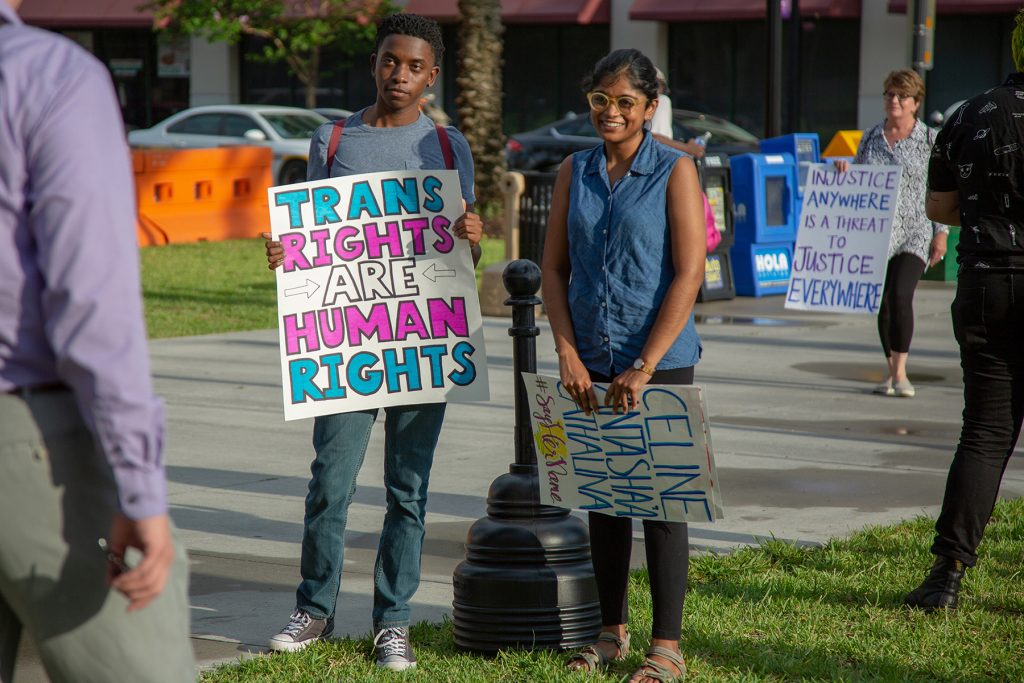 JACKSONVILLE, Fla. – More than 100 allies and activists from Jacksonville’s LGBTQ community stood before an oversized American flag stretched across the columns of the Duval County Courthouse in late June, chanting, demanding justice and honoring the dead.

The Trans Lives Matter: A Call for Justice rally on June 27 mourned three black transgender women who have been murdered in Jacksonville since February. Celine Walker, 36, was killed Feb. 4 in a hotel room. Antash’a English, 38, was the victim of a June 1 drive-by shooting. Cathalina Christina James, 24, was fatally shot in a Jacksonville hotel June 24.

The Human Rights Campaign reports that 14 transgender people have been murdered in the U.S. since the start of 2018. A total of 28 were murdered in 2017.

“We are afraid, and we feel alone,” said rally speaker AJ Jamerson, a leader with the Jacksonville Transgender Action Committee. “We don’t feel heard, and we feel small. We try to work with the people and the systems in power, but it doesn’t feel like they want to work with us. … We are forced into dangerous situations to survive, and we are punished for existing.”

Organizers of the rally protested the response by the city of Jacksonville and the Jacksonville Sheriff’s Office, organizers of the rally said. The sheriff’s office initially reported the murder of a man in the case of each woman’s death, misgendering the victims based on their gender identities at birth. The city and the sheriff’s office have not released a statement acknowledging the murders.

Chris Hancock, a public information officer with the Jacksonville Sheriff’s Office, told News21 that the sheriff’s office identifies victims based on their official government IDs.

“We’re given what we’re given,” Hancock said. “These individuals, if they wanted to be known by a different name than what’s on their official government ID, then that’s a process they could have undertaken, but they failed to.”

The sheriff’s office does not have a liaison that works directly with the local LGBTQ community — a position found in an increasing number of police departments across the nation and in other Florida police departments such as Fort Lauderdale, Gainesville, Orlando and Miami Beach.

In the months since the first murder, the transgender community’s fears have escalated, said Jamerson and other organizers of the protest.

The sheriff’s office has not announced suspects in any of the murders, and Hancock could not comment on possible hate or bias motivation in the killings as they are still open investigations.

Several LBGTQ activists at the rally said they believe the murders are hate crimes, and brought up the possibility of a serial killer targeting Jacksonville’s transgender community.

“I understand that there is protocol and procedure… I get it. But there’s still a way to do everything,” said local activist and speaker Chloie Kensington at the rally. “So I am calling on … our chief of police, our mayor, as well as the city council to denounce these murders, to condemn them and call them what they are: heinous hate crimes.”

“You took an oath and a duty to protect and defend, and you have not protected, neither have you stood up and defended,” said speaker Stanley McAllister.

Jimmy Midyette, a staff attorney with the ACLU of Florida in Jacksonville, said the ACLU, Equality Florida and other local activist groups will be meeting soon with the sheriff and other his department’s leaders to discuss their policies and communication with the public.

Midyette said he also hopes for a public meeting between the transgender community and the Sheriff’s Office soon, and that the sheriff knows that there’s a community that’s in pain and he doesn’t like that.