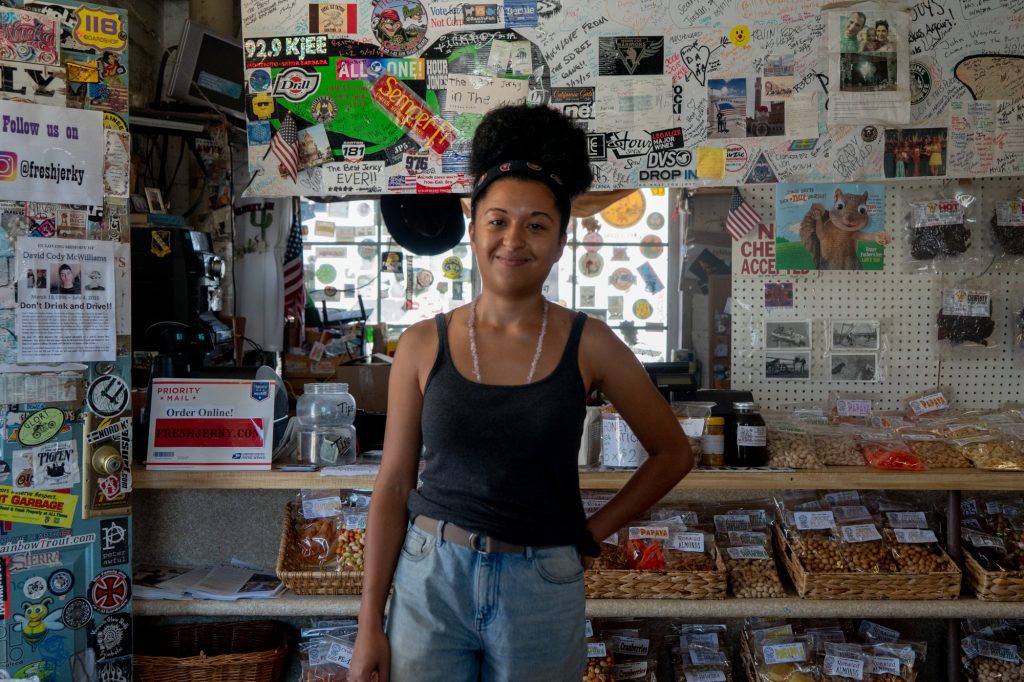 Nora Berguem, a native of the area, studies sociology in Los Angeles and works at Gus’s Really Good Beef Jerky during the summer. (Lenny Martinez Dominguez/News21)

Fear of the unknown. Fear of difference. Fear of hate.

Outside the colorful, quaint store hangs a flag saying “God bless America,” but she said the country still remains racially and politically divided.

“There is a lot of friction between racial groups in America. African-Americans and immigrants are particularly targeted today,” Berguem said. “Children are practically being put into internment camps at the moment. We like to say that we’re ashamed of the Manzanar National Historic Site down the road, which was used as an internment camp for the Japanese during World War II, but yet we’re doing the same thing again today. If we look back at what is happening now in 30 years, we will be really ashamed,” she said in reference to President Donald Trump’s zero tolerance policy where migrant families have been separated at the U.S. border.

Fifteen miles north from the lively jerky shop along one of California’s oldest highways, the News21 SUV pulls up at the Manzanar National Historic Site.

Following Japan’s attack on Pearl Harbor in 1941, some 120,000 Japanese Americans were imprisoned at the camp overlooking the vast Sierra mountains.

The now desolate camp stands alone in the middle of the desert as a reminder to American society of how hate and fear can quickly materialize.

Tourist Mina Monden, who was born in Japan but immigrated to America in 1968, bows her head at the memorial, paying homage to her ancestors.

“Hate comes from fear and lack of understanding. If you have a totally different skin color from someone else, you automatically become afraid,” Monden said. “I’m from Japan and we have thousands of different cultures and beliefs, but we never have a fight or hate each other. In America, people are different.”

Hundreds of paper cranes strung together decorated the Manzanar cemetery, left as offerings from visitors. The front of a large stone monument reads “Soul Consoling Tower” in Japanese Kanji characters.

“Being here today at the old Japanese internment camp, I feel for my ancestors,” Monden said. “Americans were afraid of the Japanese after Pearl Harbor. That’s why they treated us like this here. Otherwise they wouldn’t intern all the Japanese together. They were afraid for their country.”

Tourists Terry and Elizabeth Vance from Elko, Nevada, echoed this sentiment of fear.

“Anybody who is different is a target in America today. We are building walls, we are still building weird prisons in the middle of nowhere like this Japanese internment camp,” Terry Vance said. “I think there are people who have learned (from our past). I hope in my heart that will be enough.”

Bernadette Johnson, superintendent of the National Park Service at Manzanar, said the internment camp shows what happens when fear, racism and prejudice build up against one group of people.

“I don’t think we want to make that mistake again. We know it’s a dark part of our nation, but it’s a place where people have to come and contemplate what can happen when fear and racism occur,” Johnson said. “That is what led to the incarceration of Japanese-Americans during WWII. We simply cannot forget what happened to those people and we cannot let it happen again.”

Forty-five miles north of Manzanar, back on the dusty U.S. Highway 395, the News21 SUV drives through Johnson’s hometown of Bishop, California, with a population of 3,800.

It is there that reporters meet community activist Stephen Muchovej, who emigrated from Brazil and lives in the small town with his husband, Eric.

“As humans we intrinsically fear the unknown. We fear what is foreign to us. We see it within all communities,” Muchovej said. “Within the LGBTQ community, there is fear especially among the transgender community. No one, unless you are transgender can say what it really means to be transgender. There is a still a lot of fear about what that means. Fear of the unknown. And that is what is causing hate and divides in America today.”

With that parting thought in mind, the News21 SUV leaves behind sunny California to find new stories in Nevada.